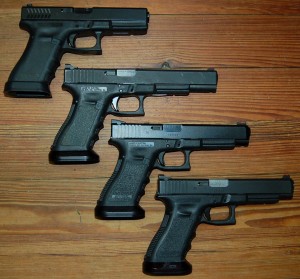 One of the more-popular competition modifications that have been done to the Glock pistol is the “Single-Action” conversion.  I do NOT recommend these, especially for the casual competitor.

The Glock “Safe Action” trigger system was revolutionary when it was introduced in 1986.  It featured three passive safeties in a design that was extremely safe, even if one of its features were to fail.  The Glock features a Trigger Safety (designed to prevent inertia of the trigger bar from firing the pistol if it took a severe impact to the rear of the pistol,

such as would occur if the pistol was dropped and it landed “muzzle up”), a “Drop Safety” (designed to prevent inertia from causing the trigger bar from being knocked down during a drop), and the Firing Pin Safety,
which blocks the Firing Pin from moving forward unless the trigger is pressed fully to the rear.  These safeties all disengage at approximately the same time when the trigger is pressed.  This is roughly ¼ inch into the ½ inch long trigger stroke.

Competitors have loved the Glock for its reliability and simplicity.  The most-often heard complaint is on its trigger.  Some say that the Glock trigger leaves a lot to be desired, mainly because its long stroke and its “mushy” feel.  Some of these shooters try to compare the Glock trigger to what they are used to with their $2000 “Limited” 1911s.  When I hear this, I want to suggest to these shooters that they contact Dave Sevigny, Armando Valdez, or the numerous other IPSC and IDPA shooters who earned their “Master” classifications with Glocks.  It’s the singer, not the song.

Most of the “trigger jobs” that people pay $150 to $200 for feature some sort of “Single Action Conversion”.  The gunsmith installs pins or setscrews that limit the forward travel of the trigger to its “reset” point.  The trigger never goes fully forward.  Overtravel is usually taken out also, but that doesn’t present a safety problem.

The problem with this arrangement is that all three safeties in the gun are deactivated BEFORE the reset point.  I can hear it now: “What’s the problem?  The Glock is a double-action gun and the striker is not fully cocked until the end of the trigger stroke.”.  Well….sorta.

If you look at your Glock and the trigger is in its relaxed position, the firing pin is actually about 45% cocked.  I have proven in experiments that this amount of compression on the Firing Pin Spring is enough to light a primer about 50% of the time.  If anything in the system breaks and allows the Firing Pin to go forward, the only thing preventing a discharge is the Firing Pin Safety.

When the trigger is at the reset point, the Firing Pin Spring is compressed almost 90%.  Igniting the primer is a 100% surety at this compression.  The major problem here is that there is NOTHING in the system that will prevent this discharge in the event of a parts failure.  The Firing Pin Safety is already depressed by the Trigger Bar by this point.

Modified Glock triggers do feel good.  There is no arguing this. They are easier to shoot well because of the shorter distance that the shooter must move his finger between discharge-reset-discharge.  If you just have to have one, go ahead and get it.  Just be aware of the risks that are involved.  Caveat Emptor

My point is this:  Is that trophy that you might win on Sunday worth the possibility of ballistic castration?  I don’t know about you, but if it ever happened to me, I would hope that the gun cycled.  I would want a bullet readily available that I could put in my own head!