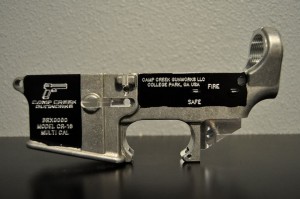 When looking for receivers for your AR-15, AR-308, or other rifle, you’ll be faced with a decision: billet or forged?  In order to answer this, let’s look at the differences and decide whether it’s worth the cost difference or not.

The material that most AR receivers are made from is an aluminum alloy called “7075 T6”.  It has similar qualities whether formed into a billet or forged into a receiver shape; the only difference is how it is processed.

First of all, what is a “billet”?  Simply put, it is a block of a material, comparatively narrow and generally square, especially one rolled or forged from an ingot.  Put this way, you can see that it is really nothing special.  It doesn’t say “irradiated by cosmic rays to strengthen the base material” or anything like that.  A billet is, for all practical purposes, a rectangular cube of aluminum.

What is a “forging”?  It’s a block of aluminum, formed by being hammered into a shape that is generally that of the finished product.

To make a billet into an AR receiver, the chunk is placed into a milling machine and everything that doesn’t look like a receiver is milled away.  Because it starts life as a solid rectangle, the artistic side of the machine operator is free to make a “cool” looking receiver; he can make it hexagonal or octagonal.  If he has time, he can make it decatagonal for the discriminating customer.

A forged receiver, on the other hand, comes out of the forge very close to its final shape.  Any shooter can look at a forging and say, “Hey, that’s an AR-15!”.  The machinist just removes a little material to bring the exterior dimensions down to the final size, broaches the magwell, and drills holes for the hammer and trigger pins and the safety.

Are there any inherent advantages or disadvantages to either production method?  There are a couple and I feel that they give the edge to Forged.

Back when a lot of guns were made from castings and CNC wasn’t around, this was a problem.  The castings were made so that they were VERY close to final dimensions.  That resulted in less material waste and less machining being required.  The problem was that the Datum Line had to be set exactly right in a very narrow range; any error and the trigger/hammer pins would be just slightly “off”.  You could NEVER get a good trigger on the gun or the magazine would fall out because the mag catch was in the wrong place.

In conclusion, I think that a forged receiver is just as good as a billet receiver.  In some ways (structural integrity), it may even be better.  It will NEVER be as pretty.  For my money, I’d stick with forged.  Spend the money that you saved on a better barrel, or a nicer trigger unit than the one you’d planned on.  Or better yet, spend it on dinner for the wife.  Reward her because she didn’t kill you for buying ANOTHER AR-15….